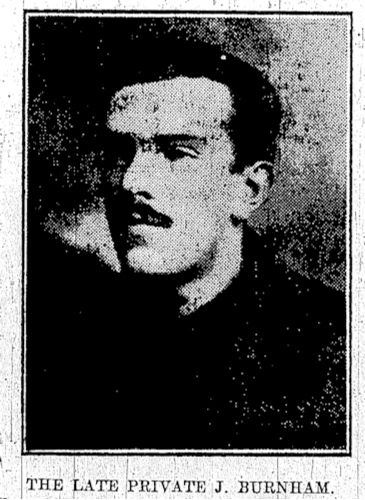 John James Burnham was born in 1893 in High Wycombe. His parents were John and Elizabeth and he lived with them and his three younger brothers (William, Leonard and Sydney) and two younger sisters (Annie and Winifred.) In 1911 they lived at 71 Totteridge Road, although by 1916 they were living at 67 Totteridge Road. In 1908 he achieved a diploma in model making and modelling design from the School. he also won a prize for wood carving.

His father had been invalided but despite his affliction, the three available sons (Sydney was too young) all gave up work and enlisted. Leonard (4th Berks) survived but both John and William were killed.

John was 23 when he was killed on February 10th 1916. He originally served with the Oxford & Bucks Light Infantry 1/1st Bucks Battalion (the Bucks territorials, Wycombe Detachment) but a week before he was killed was drafted into the 145th Brigade Machine Gun Company. The Bucks Free Press wrote, "He was always of a very cheerful disposition and up to the time he wrote his last letter (on February 6th) he was quite well and happy. Now his parents are suddenly bereft of a dutiful son."

The Chaplain, E.T Helm, wrote, "I am very sorry indeed to have to send you such very bad news. Your son, John Burnham, 2566, was killed instantly yesterday afternoon by a shell. He was, as you know, attached to the 145th Brigade Machine Company. We are laying him to rest this afternoon in the Military Cemetery." Lieutenant Bernard Green, writing on Feb 11th, to John's father said, "He was on duty with his team in the machine gun emplacement, when a large shell exploded right in the dug-out. His is being buried this afternoon with six others of the Bucks Battalion and I will see that his grave is kept up. A wooden cross is being prepared, and will be put up over his grave. He was always diligent and keen in his work, and we all sympathise deeply with you in your loss."

Private Bert Kingham (Wycombe) also wrote describing the death of Private Burnham, who he says "died bravely doing his duty, helping other the stretcher bearers with the wounded, when another shell came over and killed him and six others, who were buried this afternoon. For the last three or four days it has been hell here. The Germans have been shelling us almost without a break. I shall go and visit Jack's grave tomorrow. I must close now, for I feel heartbroken tonight at having to write such sad news to you."

He is buried at Hebuterne Military Cemetery near the Somme in the Pas de Calais. His listing with the CWGC can be found here. His brother was killed on Oct 7th 1918 and is buried at Templeux-Le-Guerard British Cemetery in the Somme.