Frank was born in Wycombe in 1893. His parents were Albert and Martha and they lived in Lane End (having moved from Upton Villas, Hughenden Road, where they lived in 1901.) He had one older brother, Albert, two younger brothers and two younger sisters, Minnie, William, Albert, Edward and Daisy.

He won a prize for drawing in 1908 at the School and then went on the work for Steases Saw Works. He signed up in April 1915 (the first person in Lane End to enlist) but was seriously injured in July 1915. He returned to France in December 1915 acting as a despatch rider. He died near Ypres on the 22nd August 1917 and is buried in Perth Cemetery (China Wall). His listing on the Commonwealth War Graves Commission site can be found here. 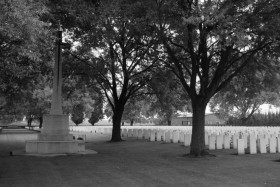