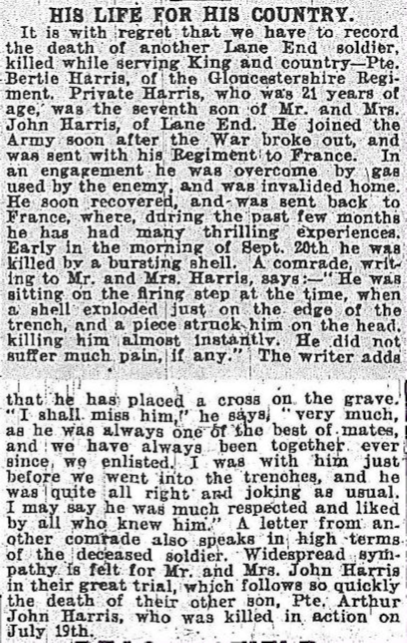 Bertie was born in July 1895 and his parents were Johnand Sophia. He had 3 older brothers (Horace, Charlie and Arthur), two older sisters (Ruth and Alice) and a younger brother (Ralph). They lived in The Row, Land End. He passed a shorthand qualification at the School in 1908 and in 1911 was an errand boy at the chairmakers where his father worked.

He signed up, soon after the war broke out, into the Gloucestershire Regiment (10th Battalion). He served in France before becoming victim to a gas attack and was invalided home. He soon recovered and was sent back to France, where (according to the Bucks Free Press) he had many 'thrilling experiences.'

Early in the morning of September 20th 1916, when he was 21, he was killed by a shell. A comrade wrote saying, "He was sitting on the firing step at the time, when a shell exploded just on the edge of the trench and a piece struck him on the head, killing him almost instantly. He did not suffer much pain, if any." The writer added that he had placed a cross on the grave. "I shall miss him." he said "very much as he was always one of the best of mates, and we have always been together ever since we enlisted. I was with him just before we went into the trenches and he was quite all right and joking as usual. I may say he was much respected and liked by all who knew him."

During September 1916 the Gloucestershire Regiment were part of the 1st Division fighting in the Battle of Flers-Courcelette, which was part of the Battle of the Somme. Bertie is buried in Caterpillar Valley Cemetery at Longueval in the Somme. His listing on the Commonwealth War Graves Commission site can be found here.

Bertie's older brother, Arthur, was killed two months earlier on July 19th when fighting with the Oxford and Bucks Light Infantry during the attack at Fromelles. He is buried Laventie Military Cemetery. Both brothers are remembered in Lane End Church and Lane End Memorial Hall.