William was born in Hackney in 1888 into a family offurniture makers. His father Thomas was a French polisher from Wycombe and his mother Emilyn was from Marlow. It is unclear why they moved to Hackney for a few years but this may be due to the availability of carpentry work (there are other examples of Wycombe furniture craftsmen fitting out

houses in Hackney) but by 1895 the family had moved back to Wycombe. He had four brothers, Thomas, Frederick, John and Albert and two sisters, Mabel and Elsie. They lived at 17 Desborough Street in High Wycombe.
He studied at High Wycombe Science and Art Schools, the forerunner of John Hampden Grammar School. He was successful at school, winning first prize for Carving and Modelling Design as well as the Manufacturers’ prize for Woodcarving in 1907. He also entered the National Wood Carving Competition in 1909 and won a prize.
He married his wife Elsie May on January 25th in 1913 in Christ Church, High Wycombe (which was near to the station and was demolished in the 1930s) and they lived at 8 Brook Street together. He had a son called Norman William born on 3rd December 1913. Before the war he was employed by Mr Craft for 10 years, chair manufacturer of Oakridge Road. His father and brother Thomas were French Polishers and his brother Fredrick was a wood carver.
He was examined and enlisted at Finsbury Barracks in Shoreditch on June 1st 1915 and declared in good physical development at the height of 5 foot 3 inches and joined the 20th Middlesex Battalion as a Private registered G14184 before transferring to the 1st Battalion on 21st May 1918. He went overseas on June 5th 1916 and he was promoted to Lance Corporal.
He was twice wounded in the field and returned home in January 1917 before returning in August 1917. Again wounded in December 1917, he did not return home. He was killed in action on 25th September 1918 during the one of the last offensives, the Battle of Epehy, aged 30 and is buried in the Domino British Cemetery.
The Bucks Free Press stated that “he was always of a bright and cheerful disposition”. The letter home, written by the Rev E L Marsden, said that, “He is greatly missed by all his comrades, may he find peace and rest.” He was awarded the War Medal and Victory Medal posthumously upon the ending of WWI. His wife was given his pension allowance of 22 shillings per week, which she accepted to pay for the upbringing of their child Norman. She was also sent his possessions including his cap badge, letters, playing cards and a bible.
His listing with the Commonwealth War Graves Commission can be found here. 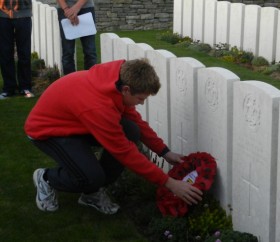 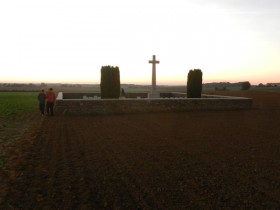