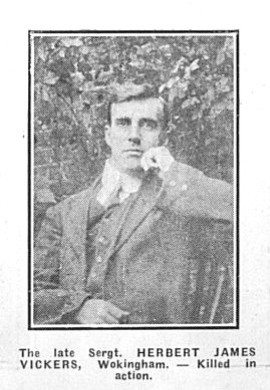 Herbert was born in 1882 and his parents were George and Ann. They lived in St Mary's Street (the picture below shows St Mary's Street and was painted in the 1920s by W J Stamps the Headmaster of the Art School - the orginal is at Wycombe Museum) and he had 3 brothers and two sisters. Unfortunately his mother died sometime between 1885 and 1891. He studied at the School gaining qualifications in clay modelling (1899) and, drawing in (1898 and 1900). His brother also studied at the School.

Unlike most men who studied at the School Herbert did not follow his father into the furniture trade but instead he trained to be a teacher. He attended the teacher training college at Culham between 1902 and 1904. In 1904 he started work at the British School in Milton Road, Wokingham before moving to the new Wescott Road Council School. In 1908 he married Bertha, who was originally from Thame and on March 8th 1910 they had a daughter called Marjorie. They were living in 16 Rose Street in Wokingham.

He enlisted on 8th December 1915 and was killed on 29 May 1917. The Berkshire Gazette stated that, "The news that Mr Herbert J Vickers, or to call him by the name by which he was known in the Army, Sergeant Vickers, had been killed in France was received with profound regret, and much sympathy will be felt and expressed for Mrs Vickers in her loss. Thus has another life been laid down in this frightful War: a life which was valuable to the community, for Mr Vickers was a man of sterling character, who exercised a beneficent and character forming influence upon all the young people who came within the sphere of his personality. He was a man respected in every way. The children loved him, for he was gentle, yet firm, in leading them and in teaching. On his leaving the school for the Army he was presented with a wrist watch as a token of their high regard. Sergeant Vickers was in the Royal Garrison Artillery and he was killed by a stray shell. He was greatly respected among his comrades, about forty of whom followed him to the grave. He is buried in Vlamertinghe Military Cemetery near Ieper.

The document signed by Bertha when Herbert's possessions were returned is reproduced below: 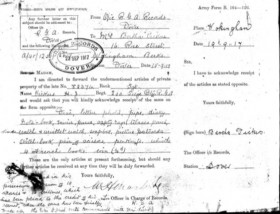 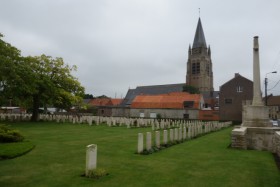