Derrick was the son of Richard and Florence and they lived in Cadsden (a village near Princes Risborough.)

He originally served in the Oxford and Bucks Light Infantry before transferring to the 2nd Battalion of the King's Own Scottish Borderers.

Having undergone jungle training in India, the 2nd KOSB sailed with the 7th (Indian) Division to Burma in September 1943. They crossed into the Arakan, and took part in the critical actions at Ngakydauk Pass and in the ‘Admin Box’. It was during the this action on the 23rd January 1944 that Derrick was killed. He was 24 years old. His grave was lost and his is remembered on the Rangoon Memorial in Myanmar (Burma.)

His listing with the Commonwealth War Graves Commission can be found here. 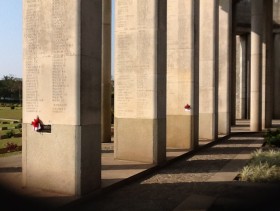