Harold was the only son of Mr and Mrs P Stratford of Hill View in Downley. He attended Downley Primary School before coming to the School. He enlisted in the RAF in April 1942 and become a Flight Sergeant> He was first an air bomber and then when the war finished was transferred to an air crew in the Middle East and Far East (38 Group 644 Squadron.)

"Ever since the Normandy landings, 46 Group had been involved in a "shuttle service" of ferrying freight to the front line and removing either wounded or freed prisoners of war to Britain. Although most of the armies were more or less static now that the War was over, Transport Command's responsibilities increased, and so 38 Group received orders to assist in this capacity. In addition to the transport of freight and prisoners of war, 644 Squadron also flew service personnel to Greece, North Africa and Italy."

644 Squadron were then based at Tarrent Rushton in Dorset. On July 19th 1945 Harold was in a Halifax, a bomber, that was on a night navigation exercise. The intended route was westwards to the Atlantic then home via the Bay of Biscay but for some reason the aircraft swung south more than 80 kms from its intended course. The cause was put down to a navigational error and a strong mistral wind. The plane crash, killing all seven on board, at the base of the Pic de Lampau on the Freedom Trail (a route used by escaping pilots across the Pyrenees.) The crash site still contains wreckage from the accident, along with a memorial to the men killed. A short service is held there each year.


His body was recovered and buried at Mazargues War Cemetery in Marseilles. His listing with the Commonwealth War Graves Commission can be found here. 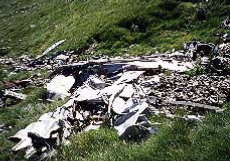